Fascinating to track with hudson institute how many european countries have given up with the official advice of mr trump on building g5 and are letting carriers just do it with whomever offers the best deal washington dc technology's biggest leap -breaking 14 nov - many nations and continents are racing into 2020s with probably the biggest innovation crisis ever du8e to greed of governments spectrum auctions at $G #G- failure to let the peoples use 5g video would 5G exist without china -discussion welcome chris.macrae@yahoo.co.uk

Always BRI a continent's next border trust-flows ahead of crises in new media- hitler only needed the new media of audi-tape reorder ro propagate mayhem ; the riskiest kinds of politicians see media as a free lunch instead of the next crisis of the commones- they always risk destroying girls hold up half the sky- privatise new media and sex and g=drig loards vetsted intersts seize first movers networking advnatage

Only the english language can help europe mediate its wartorn history in time for
rest of world to celebrate it as Sustainability Goal Education partner; only the bbc (returned to the epopel free ownership not governmenets) can help seatch out true www  service media leading stories of next billion jobs of renewing planet and celebrating each other's ,ost locally diversified cultures and  win-win geotrades Eurasia Belts N>E>W>S & ... BRI.school MOOC

If Eurasia had been latitude 10 degree lower-
there would have been no english empire destruction of silk road by taking over Eusasia's southern belth; the med sea 1500 most harmonious natiuons facing coastal belt would have been turned ionto a sea of refuigees; the maddening euroepan union wouldnt have pivoited around nort sea superports and landlocked swiss and luxemborg bankers and a norther Euro designed to maximise border risks

Barnier's poodle would never have existed not would balfour's ; if there had been any wars at all the only good ones would have been those where the defeated peoples agreed within a decade that the war had helped them save theor next generation and celebrate cultures of sustainbility and collaboration aligned round natures flows not man's walls

As Europe and the world's pioneer diaspora nation , its most dismal that Brussels and Berlin never understood the first principles of Adam Smith hi-trust economics 1758, the real meaning of free trde advantage of nations 1776 let alone the english commonwealth economic conflict mapping of James Wilson, Queen Victoria and Royal Bagehot - what royal failies that are left should unify with Franciscans including Metoo Clares and take down Brussel Sprouts and Strasbourg Sucks. As the father of the 1000 times fasetr connecting age of telecompiting Jon Von Neumann said macroeconomists have not yet begun to be "scientists"; they never top line the hypotheses on which their system designs compound- thereby they are our next generation's worst enemy, our species irreversible risk 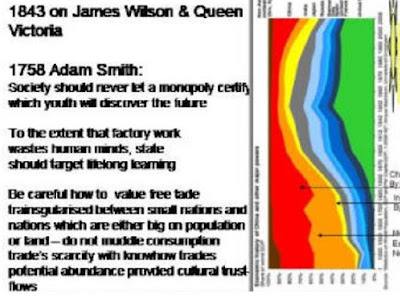 chris macrae
blog on how will your life change world with global communications youtube washington dc 1 301 881 1655 email chris.macrae@yahoo.co.uk linkedin 9500 skype chrismacraedc home of the 64 trillion dollar colaboration map , of the 7 curriculum millions of youth most need at free online university to sustain net generation's next 3 billion jobs and end poverty goals - a project of Norman Macrae Foundation- The Economist's Pro-Youth Economist and faciliator of net generation's Entrepreneurial Revolution dialogues since 1972